This edition is an odd assortment of snips, snails and pickleball tales. First up, I have some tournament videos for you to look at. I thought it would be interesting to see what it takes to win in each skill level. These matches are finals, so the players are at the top of their ranking bracket. I call this section:

3.0 MX Palm Desert – At this level the rallies are short. Most points are decided after less than five shots.

3.5 MX Palm Desert – A little more skill at this level, but the four players don’t often get to the kitchen line for any extended time.

4.0 MX Utah – This is the last bracket where you have a chance to win without a having a competent soft game.

4.5 MX Andalusia – The rallies last longer at this level and the players are better at shot selection. The guy in the yellow tee is Bret Bucher. This was one of his last events at 4.5 before he was bumped up to 5.0…

5.0 MX SW Regionals – Tada…let the festival begin!..This is some good action from all four pro players. The blue team, Rob Davidson and Shonda Schallenberger, will be competing together at the Canadian Nationals. Their lady opponent, Miok Lee, will also be playing at Kelowna.

There is one level higher than the game listed above….This next link is open MX Finals at last year’s TOC….Wes Gabrielsen and Sarah Ansboury won gold in an exciting 15 point game vs Simone Jardim and Rafael Siebenschien. In my opinion, it was the ”Game of the Year” in mixed doubles. The video is courtesy of Jennifer’s Pickleball Blog.


Wes And The World Series

I was wearing a Vancouver Canucks tee shirt when I met super star player Wes Gabrielsen at the Canadian Nationals last year. Wes and I talked hockey for awhile and he said that he favoured the Chicago Black Hawks. I was curious why a fellow that lived in Oregon would like the Chi Town sports team, so after the Chicago Cubs became world champions I sent him a message. Here is the Q&A…

Q – Hi Wes, I think my readers would be interested to know the story of you, your family, and a certain Chicago baseball team….Can you share with us why the Cubs victory in the World Series last year meant so much to you?

WG – Well, this World Series was a special one for my family and I. My father is a native son of Chicago and I was raised as a Cubs fan. My grandfather used to pick up my dad and his brothers early from school on occasion and take them to Wrigley for games when they were kids. My parents took me to about 20 games at Wrigley when I was a kid too…we are Cubbies through and through….The way they came back and won that series in epic fashion was a demonstration and microcosm of the 108 year wait and struggle Cubs fans had endured waiting for another title. The way the Cubbies never gave up was a testament to how fans have never given up on the Cubs – still holding out hope for a World Series victory. Constantly using the mantra, ”There’s always next year!” Ultimately, the victory was more than a win for my favourite team, but a way to honor and recognize the love of the Cubs that my late grandfather and uncle had in their lives. I wanted that win for my father more than anything in my life…He had never seen the Cubs in the World Series during his lifetime. He was born in 1950 and the last time the team played in the fall classic was 1945. It was so great to see his dream fulfilled and a victory to go along with it! Overall, it was a special moment for our family.

* Thanks for sharing that story, Wes. It makes me feel better about my own short wait…It’s only been 6 and a bit years since the Canucks were battling the Boston Bruins for the Stanley Cup:-) Below is a pic that I took of Wes Gabrielsen and Kyle Yates at Kelowna last year. They will be teamed up together in MD play at this year’s Canadian Nationals. 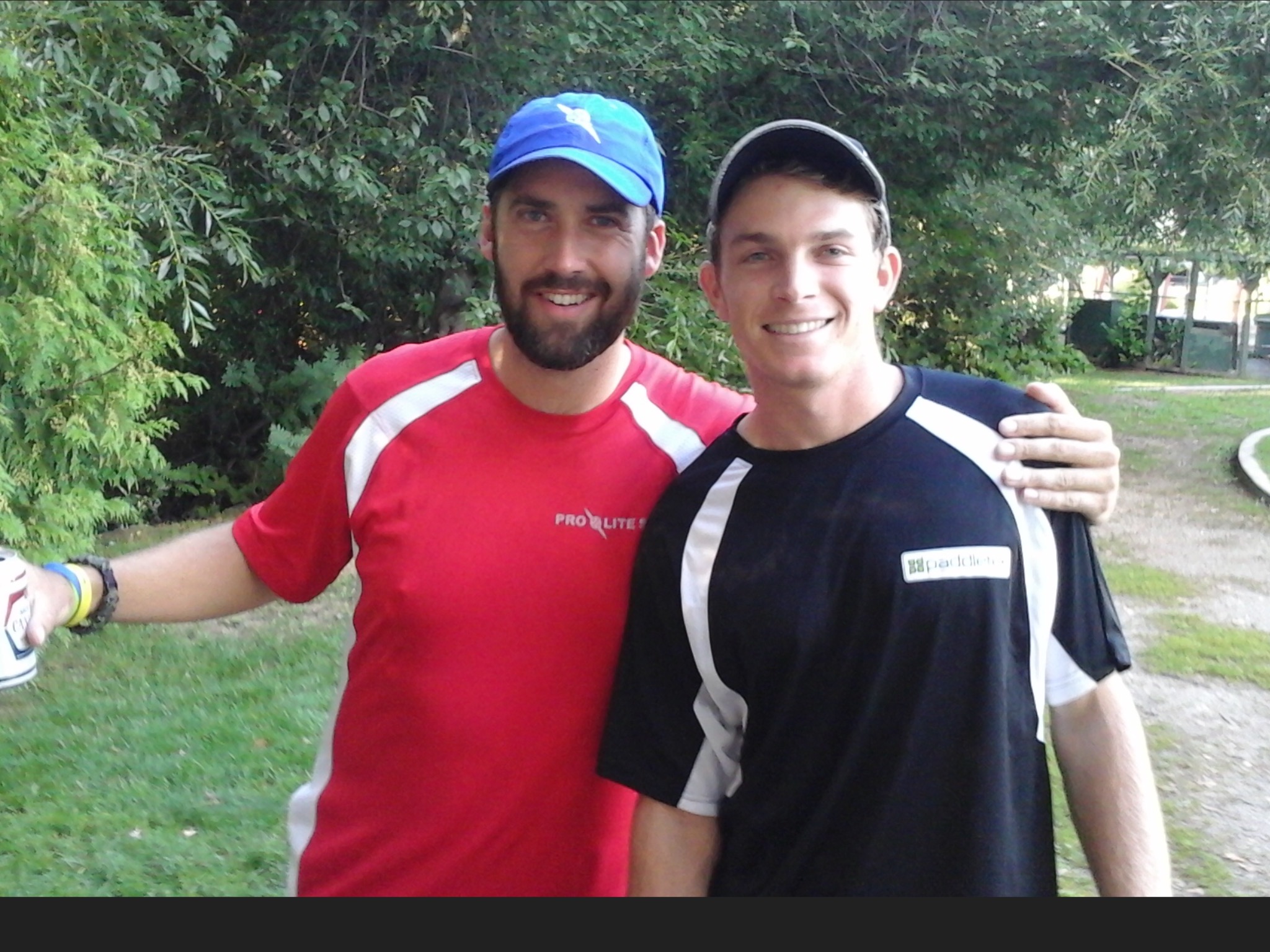 
Haiku Poems And The Sport Of The Cured Cucumber

If you have been a CC reader for awhile you may be thinking, ”Wow, that Baker fellow must be literally literal or something like that ability of word assembling of gooder paragraph makering types.”…..No?…Well, although I won’t be up for a Pulitzer anytime in the near future, I do get the odd compliment for doing Challenge Court. I enjoy the work because I inherited a love of writing. It’s in my genes…my mother is a prize winning author. Her main interest is the simple beauty of the haiku. Mom is a master of that genre and in 1989 Winona Baker traveled to Japan to receive the Foreign Minister’s Prize – the award for the top haiku among entries submitted from around the world. For my mom it felt like winning an Oscar or an Olympic gold medal.

I have been rereading Mom’s books lately and I thought it would be a good idea to see if I could crank out a few of the minimalist poems….Just to see if I could put my own twist on this style of expression. Since you should write about what you know, my own three liners will be about pickleball.

my partner poaches the ball

under the pickleball net

is it yours or mine

we run up to the kitchen

as the third shot drops

my hand is sweaty

Why I Watch The Pickleball Channel

I like to watch pro pickleballers on video. In a doubles match, if I like all four players, I will view the game four times. Even if I’m not going to be interviewing the person, I will do the viewing as if each player was to be an guest profilee. There might be a question that I want to ask him or her. Given the chance, is there something to say…some connection to be made…a small insight…words and lines. Is there a why? At the end, I want to see the person’s smile after a win and, more than anything, after a loss. I want to see what it is about that individual’s performance that is artful, a style that inspires me to be a stronger player. Then I get out on the court and try a new technique…a new move. You know…that favourite player made it look soooo easy…Good pickleballers are fun to watch, great pickleballers make you want to play.

Rusty and the PB Channel crew put together this short compilation from the 2017 US Open:

Here are some pics of some interesting local players.

1. Most of the people that I talk to only took up pickleball in the last few years. Ray Doucette is pictured with his original Jelinak paddle that he used when he played pickleball on the courts at the Chilliwack airforce base in 1995-1996. 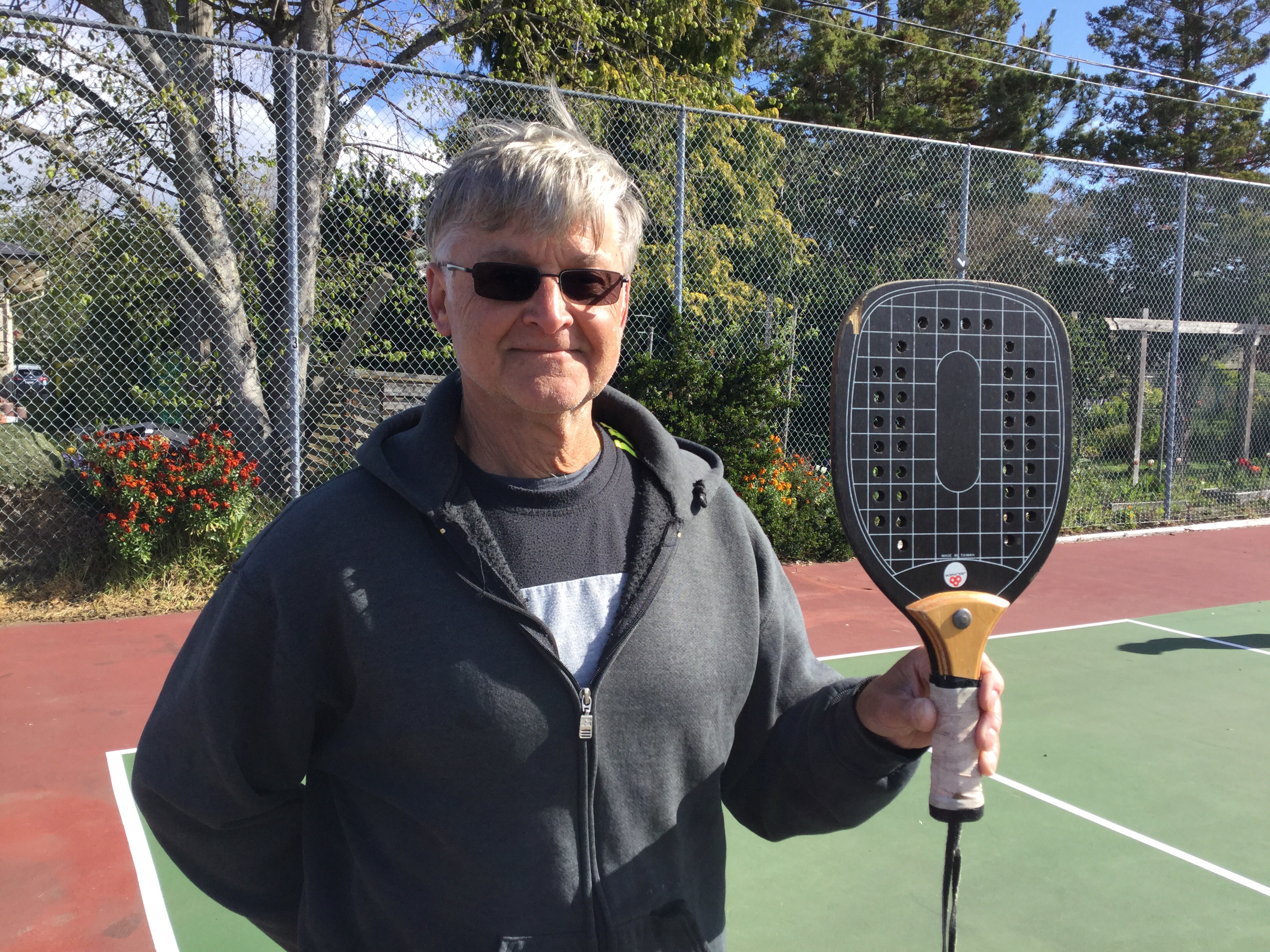 2. The Carnarvon Park pb players have been patiently lobbying our municipality to get a better place to play. The big news in Oak Bay is that we now have permanent nets to go with our designated pickleball courts. Brian Eccles, one of our club’s main negotiators, is pictured here just before we played some inaugural games with our new nets😊 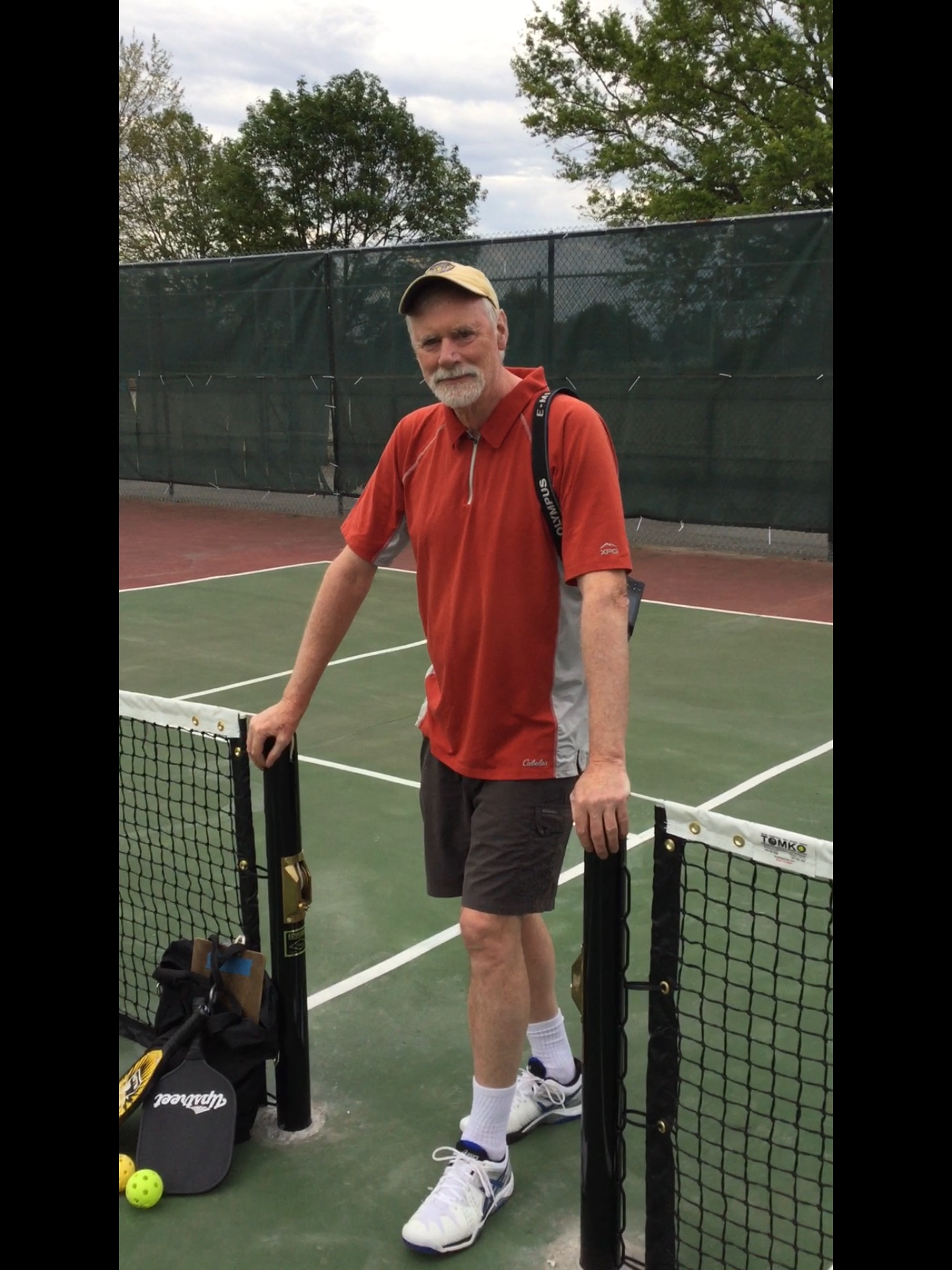 3. A group of Victoria players were down at Chehalis, WA last week for the International Indoor Pickleball Championship. Wayne Russell and Kerry Savory are pictured here with Tyson McGuffin, the gold medalist in open singles. Tyson will be battling with other top players at this year’s Canadian Nationals. 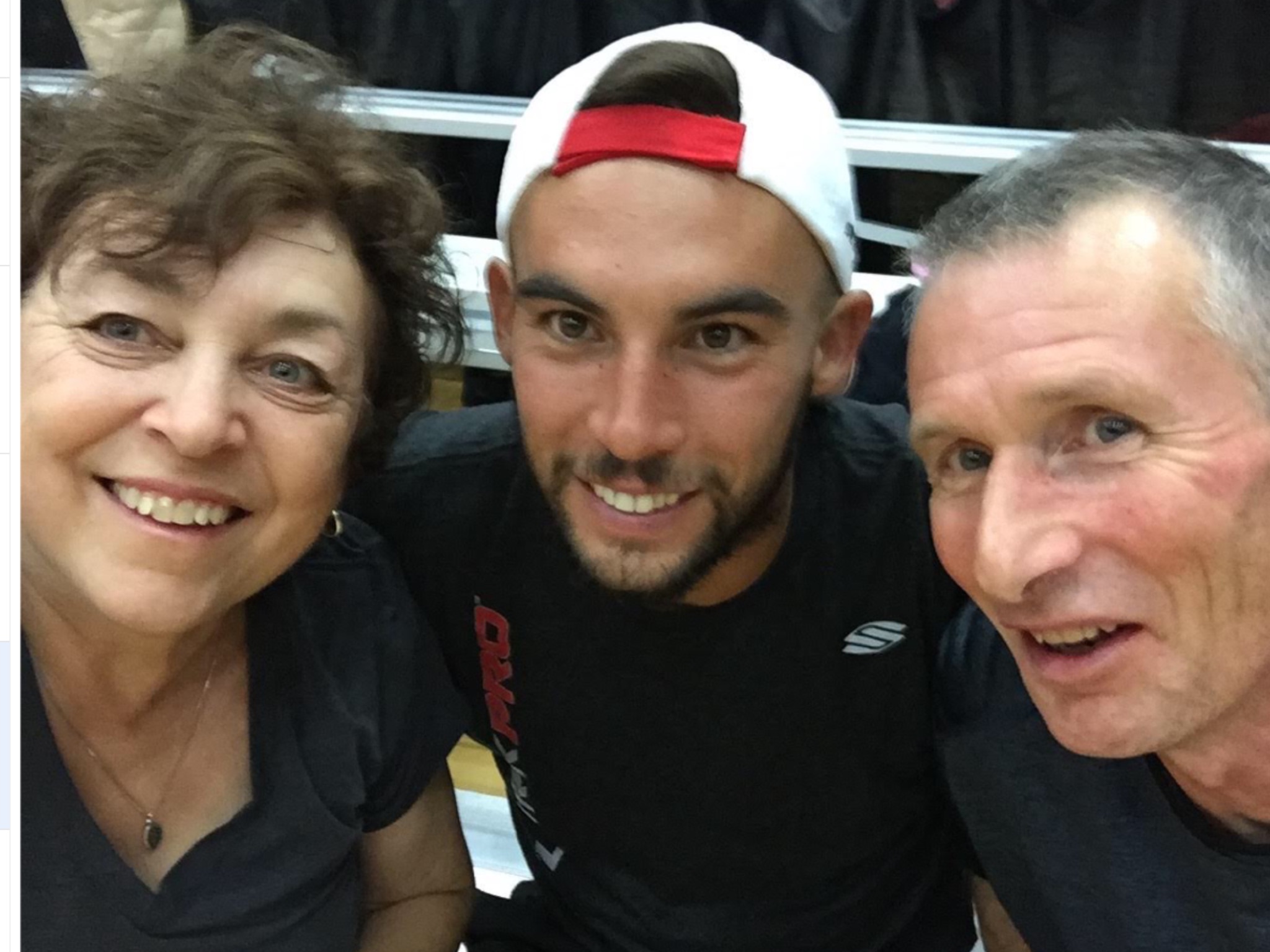 4. When Kerry Savory was waiting for her court time, she took up a conversation with a player sitting beside her. Kerry noticed the fellow had been doing great in his previous match, so she asked him how long he had been playing. ”Two weeks,” he replied without hesitation. When the guy went back on the court, Kerry exclaimed to her US pal how well she thought the Latin looking player was doing with only two weeks experience. Her friend laughed and showed Kerry her ”Enrique Ruiz Signature Paddle.” Kerry had been admiring Enrique, aka El Condor. He is a National Champion and a multiple medalist at top pb events like the US Nationals and the TOC. Wayne and Kerry are pictured below with Enrique and Stephanie Lane…Stephanie Lane won gold in open WD play while playing with Lynn Syler and Enrique and Stephanie won bronze in MX Open play. Wayne Russell and Barry Mah won silver in the 55+ 4.5 MD bracket and Kerry Savory and Kim Coleman earned silver in the 55+ 4.5 WD bracket. 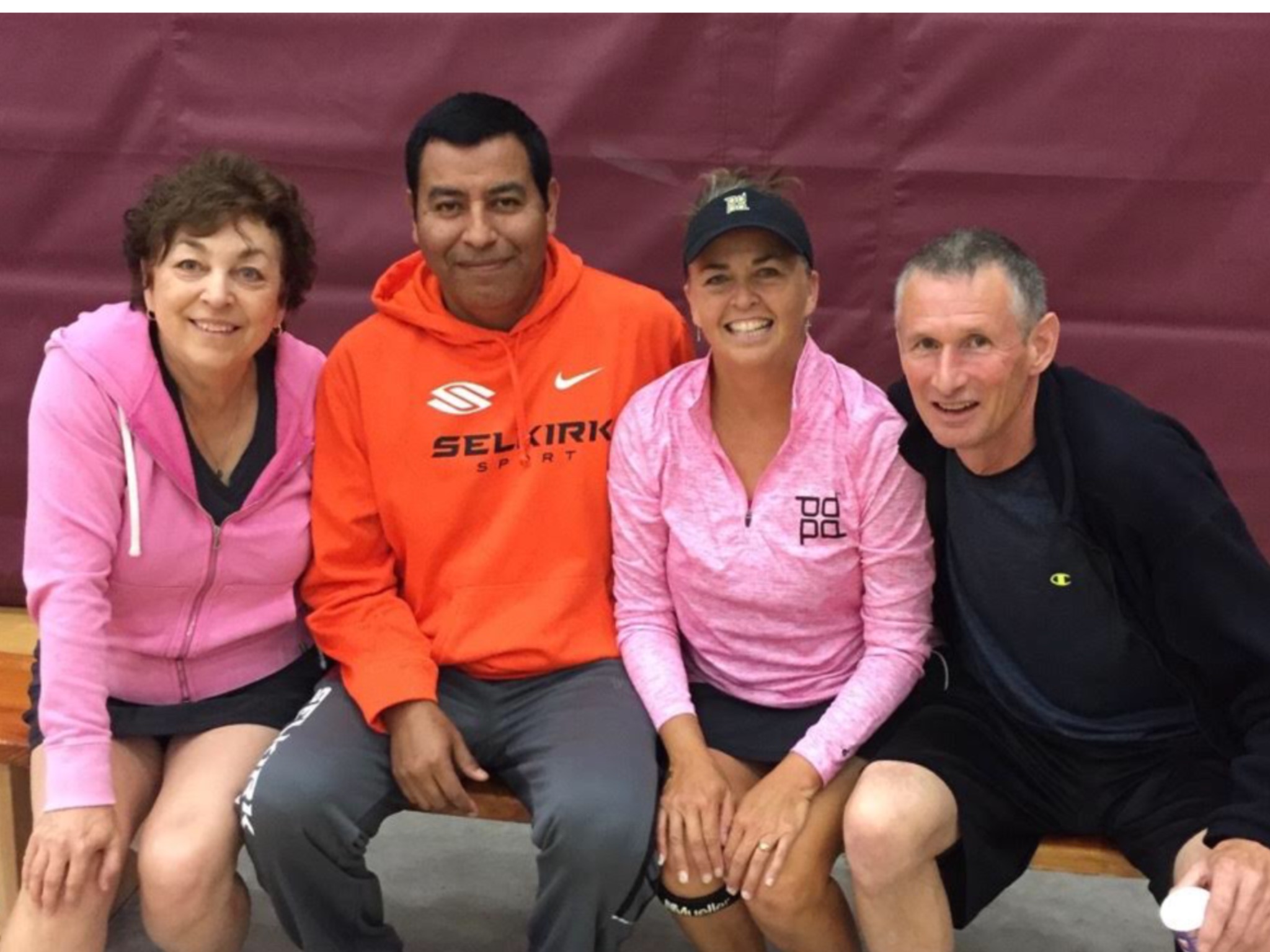 There is a lot of happening, that I will soon be reporting about…Next weekend, June 16th-18th, is the VRPA tournament at Pearkes Rec. Even if you are not playing in this event, you should go down and watch the action. There will be some good competition from some top Island players…I will soon have some more info about pro player and instructor Scott Moore and his visit to the Island. Please contact me if you have a guest room and would like to billet Scott and Susan Moore when they are in Victoria on June 29th and June 30th….I will be doing some editions on the Canadian Nationals that is coming up in early July. I will be talking about ”who’s who” to watch for if you are in Kelowna for the big show. It’s a busy time up in Kelowna. I heard from Mike Schwarz, the tournament host….Mike said that 7 courts were re-surfaced a couple of weeks ago and prior to that 4 of the courts were under water as a nearby creek had flooded. Now that the creek has settled down they were able to get the courts cleaned up….I hope that the weather continues to be dry for Mike and the Kelowna volunteers.

That’s the news for now. Until next time….

Thanks for the game,