A message to Challenge Court subscribers: I am having a problem with my wordpress program…Until I figure out how to change the size of the font, you will find it easier to read this post by going to my website – www.challengecourt.net

It’s a wrap…Scott and Susan Moore packed a lot of activities into their trip to Vancouver Island. They are a fun couple to spend time with and Pam and I look forward to seeing them again at Kelowna during the Canadian Nationals. I have some pictures to share, but first I want to talk about what I learned at Scott Moore’s pb clinic…If you have never gone to one of his sessions you may not know what to expect…Scott Moore is in his mid-fifties and yet he is able to more than ”hold his own” in doubles matches with young partners like Brian Ashworth, Wes Gabrielsen, and Daniel Moore. Scott, more than any other legendary pro, has developed the techniques that allow him to be a youngster on the court:-)…

When you take one of his clinics, you are not going to be magically transformed into a star on your home court. Like a healthy meal, you must digest the knowledge you have gained until it becomes part of your mind and body. In the case of Scott Moore’s instruction, the main part of his program is organized into a detailed plan. That’s where the faith comes in….There are ten key ideas you take home with you from a Scott Moore clinic. I plan on practicing until I make that wisdom a part of my own game philosophy. The ten principles…or as I like to think of them…the ten commandments:-)

If you want to know more about Scott Moore’s methods, I suggest you go to his website, check out what is offered, and consider going to one of his training sessions…Fun…You will learn how to make a game of it….Make ”being a better player” part of your life. 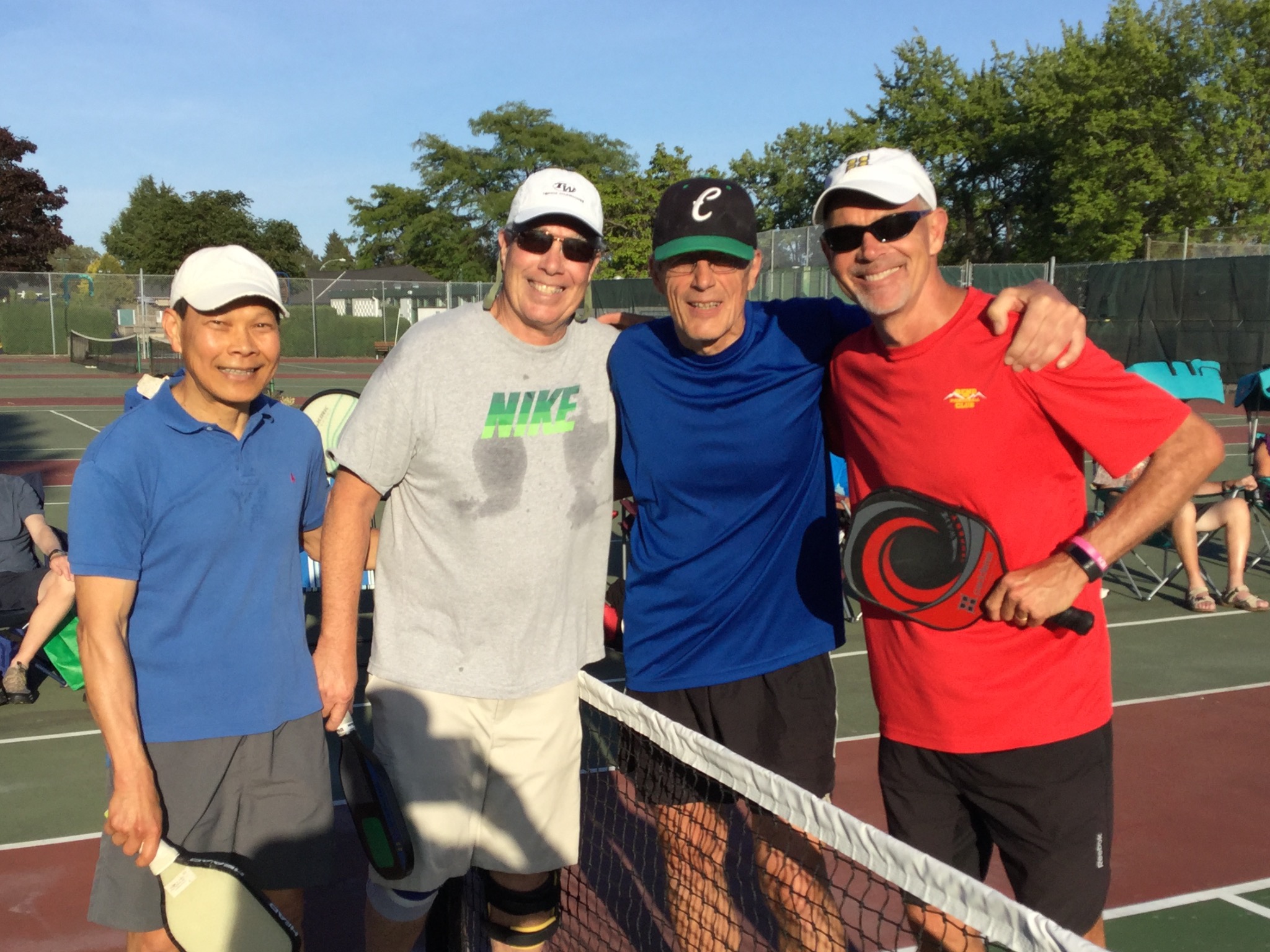 From the left…Local players Andy, Clay and Teppo had some rec play with Scott Moore. 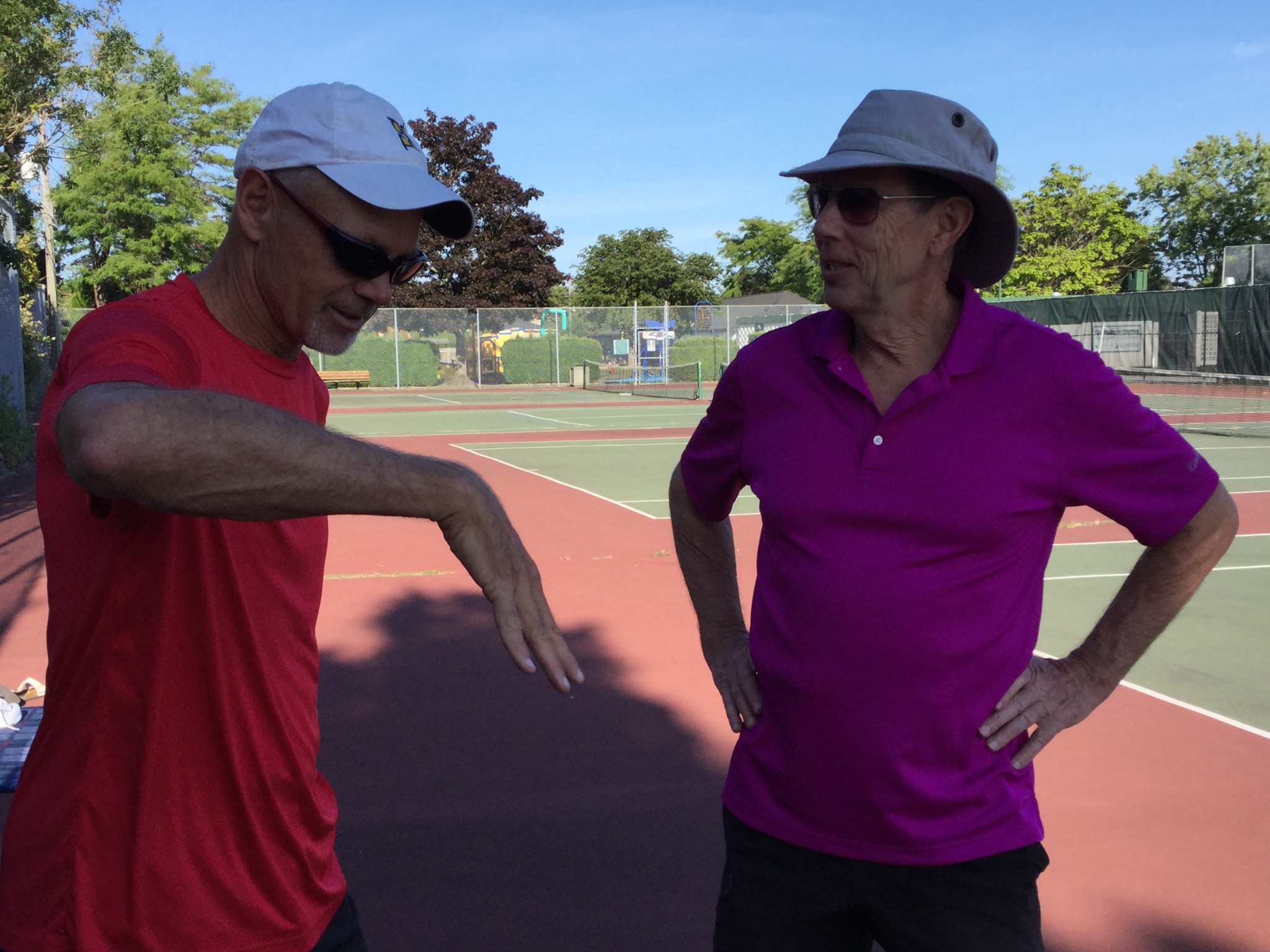 I think Scott was explaining to Ian Daniel what happens to the ball if you are good at blocking a shot at the kitchen line. 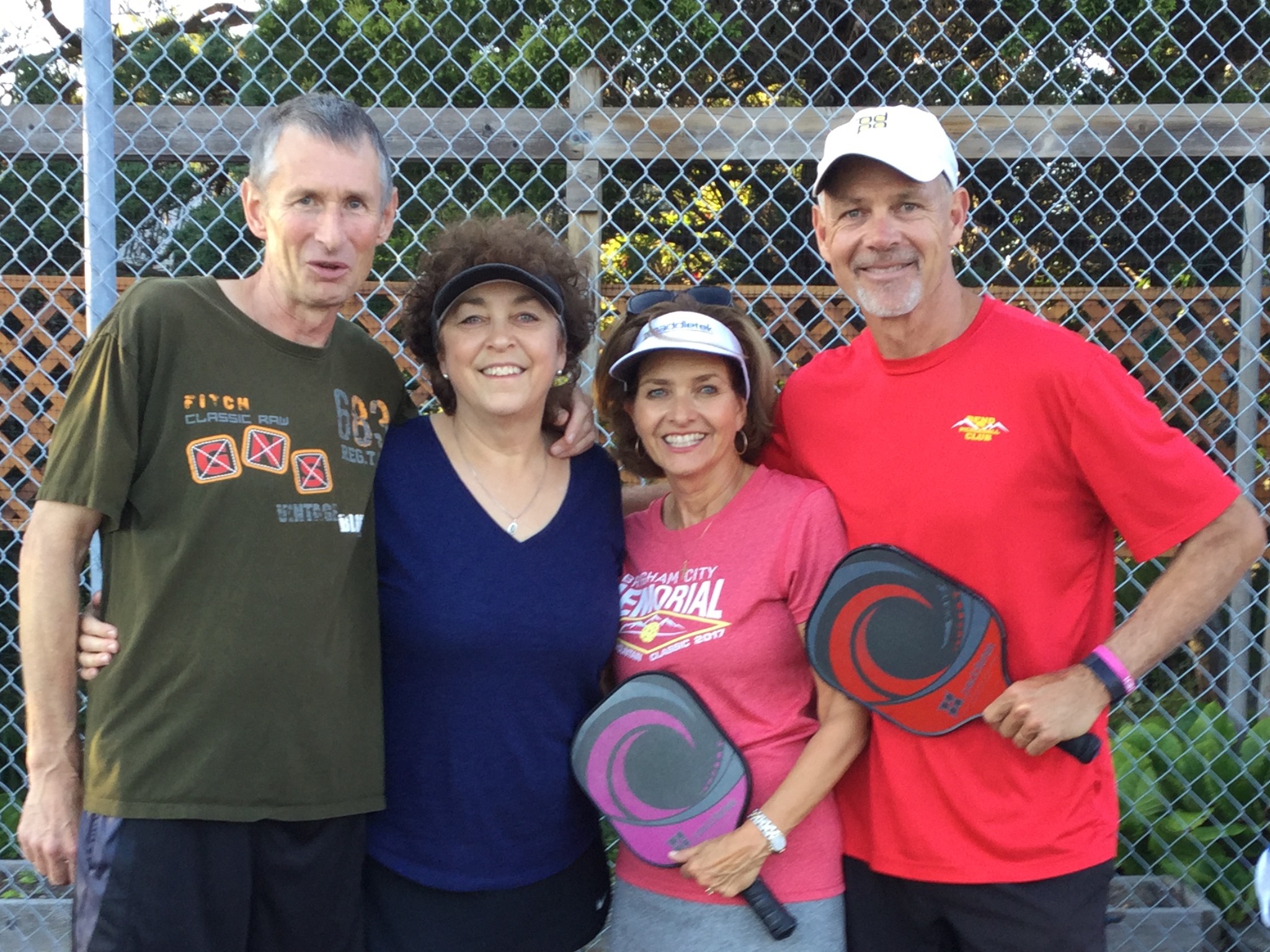 Wayne and Kerry with Susan and Scott. 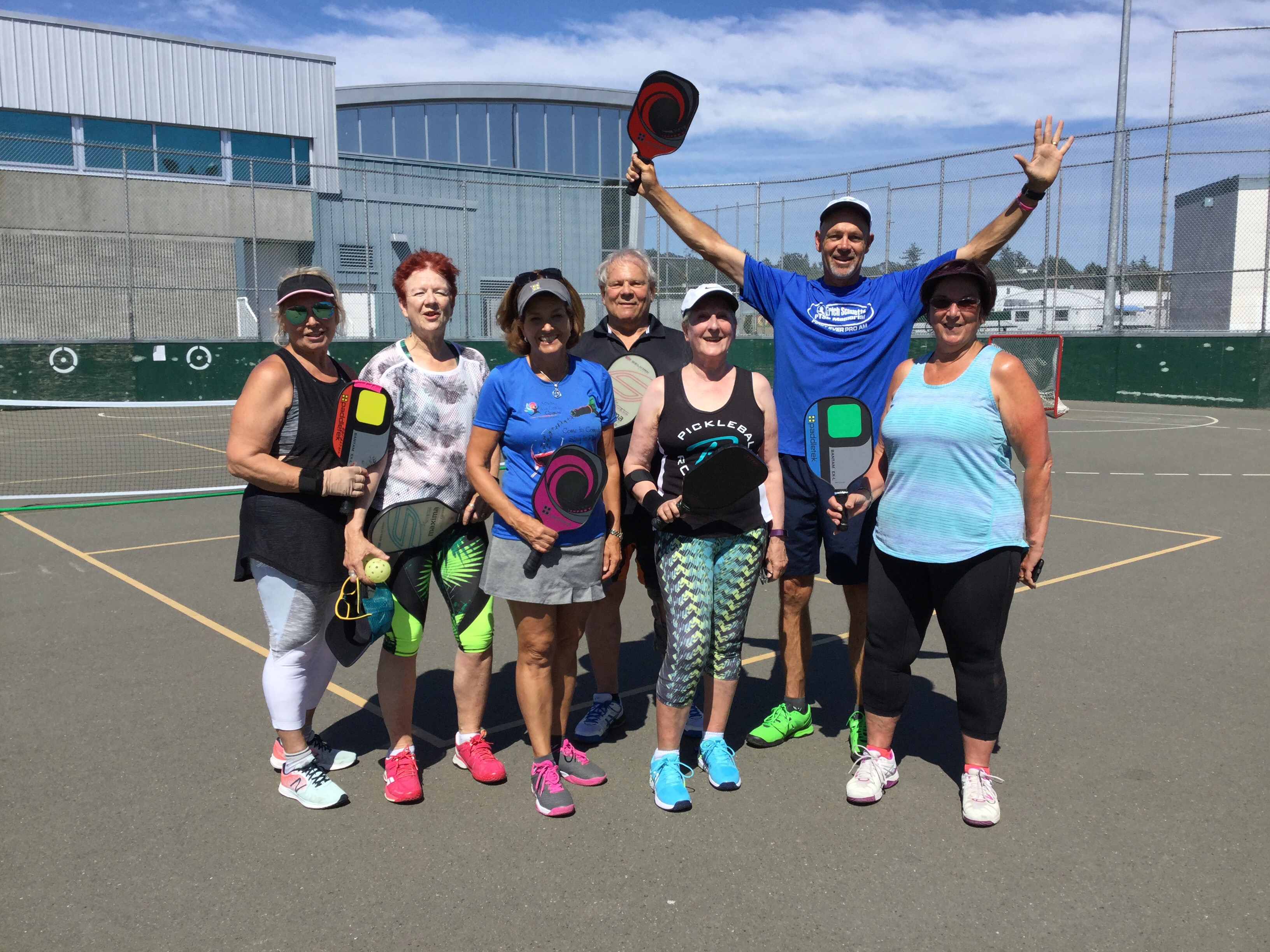 Anne, Norma, Susan, John, Pam, Scott and Wendy at the Esquimalt Lacrosse Box.
Susan said ”we are all the same”….I agree. We are all pb friends wherever we come from. Pickleball is popping up all over. From Bangkok to Brisbane, people are accepting our sociable sport as their favourite thing to do. I heard it on the cucumber vine…We are becoming a world wide pickleball family….The Moore’s are American, but I think of them as PB Internationalists…Scott and Susan are fluent in Japanese. Scott especially, has an ear for lingo and is pickleing up Spanish and other languages when they do their travel clinics in different destinations. If you are interested – like Pam and I – in going on a pickleball adventure, then I suggest you check out Scott, Susan and Daniel Moore’s site…a trip of a lifetime awaits you.     pickleballtrips.com

Scott and Susan are on the mainland now, doing clinics in Vancouver and later in Penticton and Kelowna. I sent Scott Moore a message and asked him if he enjoyed his time on Vancouver Island…Since Scott goes to a lot of pb events, I also wanted to know whether he thought Victoria or Parksville was ready to have a tournament that would attract some pro players…Here is his reply:

SM – We had a wonderful time on the island and absolutely loved the people!…They could have not been more hospitable!!….I don’t think at this time there is potential to have a pro tournament yet, as the courts are not quality enough, the level of play is still not there yet, and still not enough players…Hopefully someday that will change….Thanks again for setting it up…Scott.

Thanks Scott and Susan Moore for coming to the Rock and for your analysis… I’ll keep doing my work on my thing…I have an idea that someday we will have the courts and players to have a ”Beauty of a BC Tourney” on the Island – a regional event that will attract top players from all over British Columbia and Washington State. Anyway, as a pb super fan, that’s the kind of thing I dream about:-)

The Canadian Nationals is only a few days away. Scott and Susan Moore will be competing in mixed doubles with their close Canadian friends – Les and Cookie Drake. I will report on their matches when I get back from Kelowna…In men’s doubles Scott is also playing with the most famous Beard in pickleball…Brian Ashworth.

One of the biggest stories I will be following will be the return of legendary Canadian pb player Luba Zhekhovskaya!…Some people have asked me what Luba has been doing for the last year and a half. I didn’t have Luba’s contact info, so I contacted her teammate Mona Burnett and she sent me this report:

Hi Doug….Luba injured her knee at the Tournament of Champions in 2014. She continued to play all those tournaments with the injury and then last summer (2016) she had surgery to clean up the injury…She has been working to rehabilitate her knee but I believe this (Canadian Nationals) is her last competitive tournament…She will definitely be missed. I absolutely love to partner with Luba and yes, we had a very successful run at major tournaments…..Mona…..Thanks for the update Mona Burnett. This link is Luba and Mona’s gold medal performance at the 2015 US Nationals. https://youtu.be/CbC-QFRhbBU

___________________
American superstar Jennifer Lucore will be making the trip to Kelowna this year. As well as being the most famous and successful player in the pb universe, I think Jen should get the Honorary Canuck Award…this is the fifth or sixth time she has participated at the Canadian Nationals. It will be extra special Can Nats for Jennifer because she will be playing WD with the lady who has been at her side for many of their most important medal performances…Alex Hamner will be on the courts at Kelowna with Jennifer Lucore this year!…I am excited about Alex’s decision to come up this year. She was the first star player I profiled in the February 2nd, 2016 CC edition. Although Alex Hamner doesn’t play in as many tournaments as Jennifer Lucore, Alex is just as awesome a player as her friend Jennifer….I will be doing my best to hear some good anecdotes from Jennifer Lucore and Alex Hamner. For new players, here is a Pickleball Channel video with the golden medal girls:  https://youtu.be/GTsqhipbcHM

There are too many top players to talk about in this edition, but I have to mention one more surprise guest who will be at the Canadian Nationals this year…He is a dynamic young player who popped onto the tournament scene at this year’s US Open. He surprised many insiders by winning 2 bronze medals and a silver in doubles play. The eighteen year old also stunned the pb world by winning gold in men’s singles at Naples!….If you have a chance make sure you see this phenomenal player, Ben Johns, at the Parkinson courts in Kelowna.

Don’t Try This On Your Home Court

Before I sign off I wanted to show you some rather different videos of players who really play the pickleball game in ways that can not (should not?) be imitated. They are individuals that go against the accepted wisdom of how the sport is played….but, they each have had success with their game styles…Here they are…videos of 2 players from that creative part of the world – Southern California.

Paul Leaf, Dave’s partner in this match, told me that Dave developed his style because of his ping pong background. According to Dave, from ping pong, he is used to seeing the ball at eye level. Also, given his ping pong grip when he plays pb, he says kneeling comes natural.    https://youtu.be/tIFyAtoVxPE

Take a close look at the way Jeff holds his paddle in this SoCal match. Instead of the normal Continental (hand shake) grip, Jeff Warnick holds his paddle more like he has a tennis racquet in his hand. The result is some major spin on the ball. The fellow who posted the video, Bret Bucher, is friends with Jeff’s partner, Aaron Coyle…Here was Bret’s comments about the match…

”Jeff Warnick has a very unusual playing style but his hands are quick as lightning. He and Aaron really shocked some great teams. They beat Morgan and Marcin in three games and I have that on film….I wouldn’t recommend Jeff’s grip to beginners or teach it in a clinic, but it seems to work for him”.

I heard from Jeff Warnick that he will be competing with Christine McGrath at the tournament in Bend, Oregon later this summer….In this SoCal video Jeff is the tall fellow wearing a gray tee and ball cap.   https://youtu.be/8id5xJBMw0o

That’s all I have for this edition. The Canadian Nationals starts this Friday with men’s singles and women’s doubles…Pam and I are flying up this year…Keep the home courts popping. I’ll be doing at least couple of editions on the games when I get back…Til then…

Thanks for the game,